We spent our last week and a half in New Zealand “on holiday” driving north toward the Aukland airport, trying to soak up as much of the country and culture as possible. It is too beautiful to miss, so I want to share this final leg of our journey in the land that the Maori call Aotearoa. The first leg of our journey took us from a sad farewell in Dunedin to a joyful reunion with come of the Christchurch Student Life staff members. Much thanks to Regan, who took us on a nighttime tour of the city and a romp around the most amazing playground we have ever seen, and even put us up for the night in her flat.

Heading west from Christchurch, we swung through the Southern Alps via Arthur’s Pass. The adventures of this day will be forever burned in our memories. First, we stopped to climb on the massive rocks at Castle Hill. 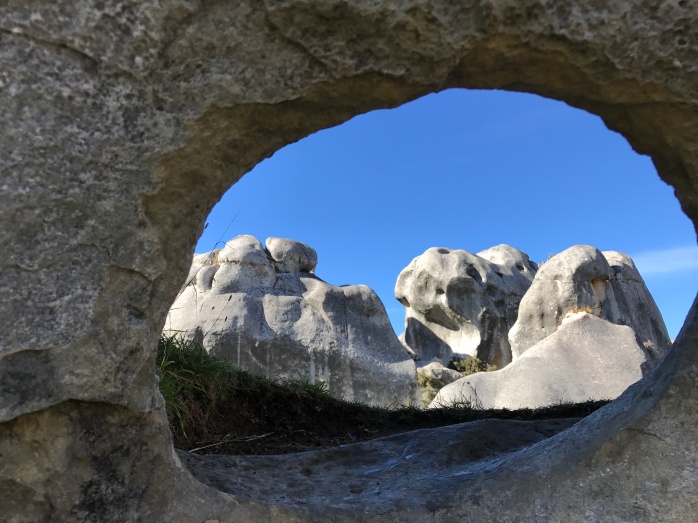 Then we wound our way up the road to Cave Stream—an under-ground stream that combines spelunking with wading. At times the ice water was up to my chest, but we plunged on for an hour through the cave with our headlamps casting circular light on the narrow limestone walls. At the end, we fought our way up over a waterfall and climbed metal rungs embedded in the wall to a narrow shelf which we scrambled across toward the yawning light of day. That final precarious climb into the warm sunshine was like coming up out of the grave. We were clod, wet, and numb, but deliriously happy—some for having the adventure and some for having finished it! 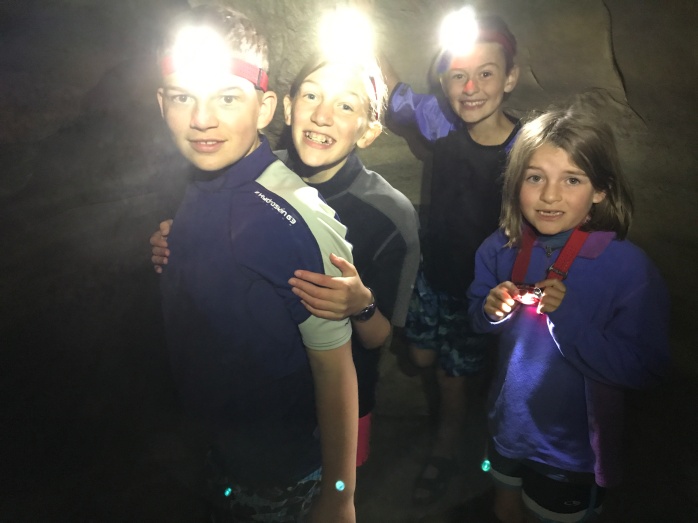 We rolled in late that night to Motueka and awoke to rain. The girls’ tent floor was a shallow pool of water. A cyclone had hit the northern island and was working its way down the country dumping water as it spun out. Our hope of hiking the famed Abel Tasman Track was dashed. It was going to be a five day hike; the forecast called for five full days of rain. Following a tip from the campground attendant, we spent the morning at the aquatic center splashing in the pool. The van had begun to leak oil so Dan spent the afternoon at a garage while I took the kids to a movie in Nelson. That night, rain drove us into a motel room where we hung the tents to dry.

The following morning, windshield wipers flailing, we boarded the ferry and waved good-bye to the soggy, but majestic, South Island. In Wellington we visited the Te Papa Museum with its stunning, larger-than-life wax figures of the battle of Galipoli. 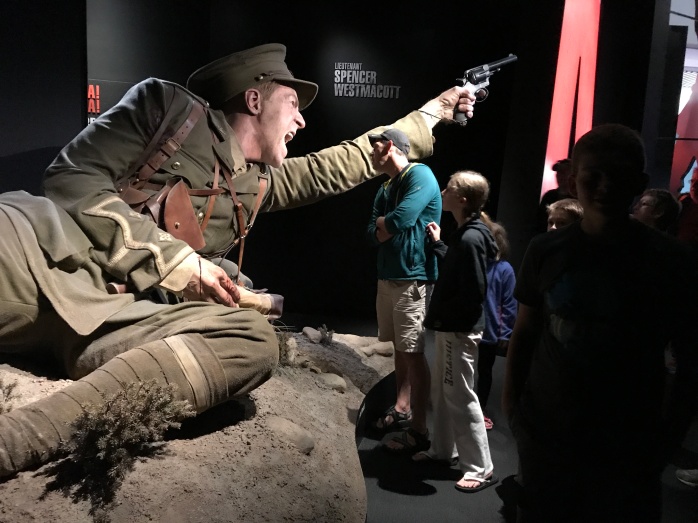 We also sought out some dear friends who direct Tandem’s Military Ministry. In their dry and welcoming home we had the joy of learning from their life and parenting, as well as sharing our own spiritual insight with the young adult Bible study group that Al usually leads. It was with regret that we finally stopped “yarning” days later and headed to the east coast town of Napier in an effort to dodge the rain.

The free campsite was out of town on a beautiful, but drizzly, lake. 🙂 We sadly misjudged the sunset, which was getting earlier and earlier in the southern hemisphere, and ended up trudging our clan through the dark, in the rain, to a massive waterfall that we could barely see. I am so impressed by the kids’ good spirits—not one complaint! They remained undaunted even when we served peanut butter and jelly for dinner and ate by the light of our car’s headlights. I thought perhaps after all that we would be rewarded with the rare viewing of a Kiwi, but apparently they were avoiding the rain. Smarter than we are, I guess! 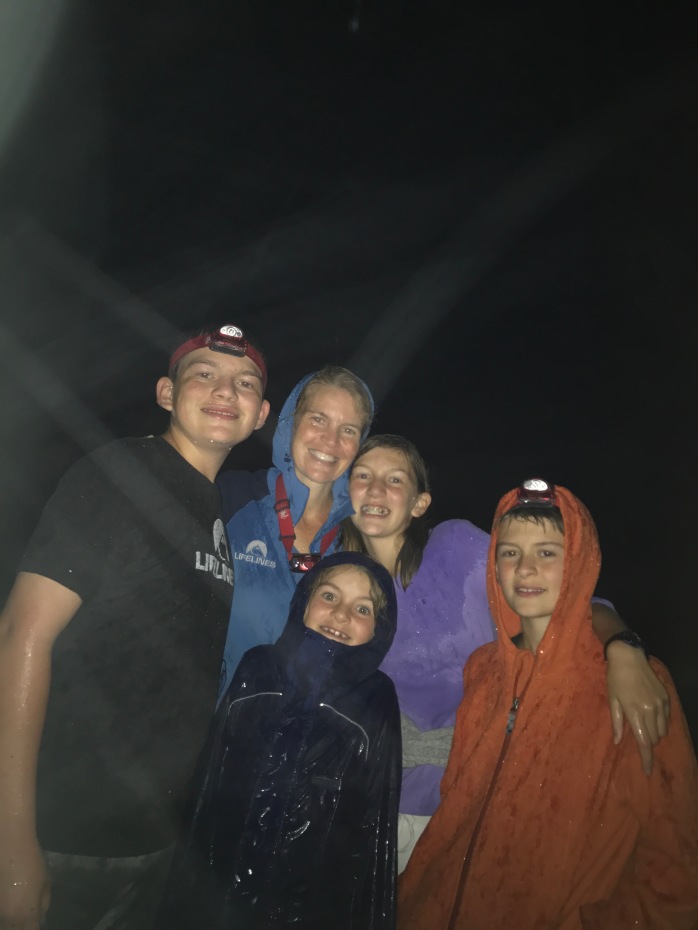 On Saturday we happened upon a giant easter egg hunt in the town square. The kids joined the throngs in pursuit of 750 hidden eggs. Collectively we found three. Next, we rented bikes and toured the long beach-side trail for about 18 kilometers. Before the day ended we wandered a bit in town, visited the Arataki Honey shop, and caught a gorgeous sunset overlooking the world atop Te Mata Peak. 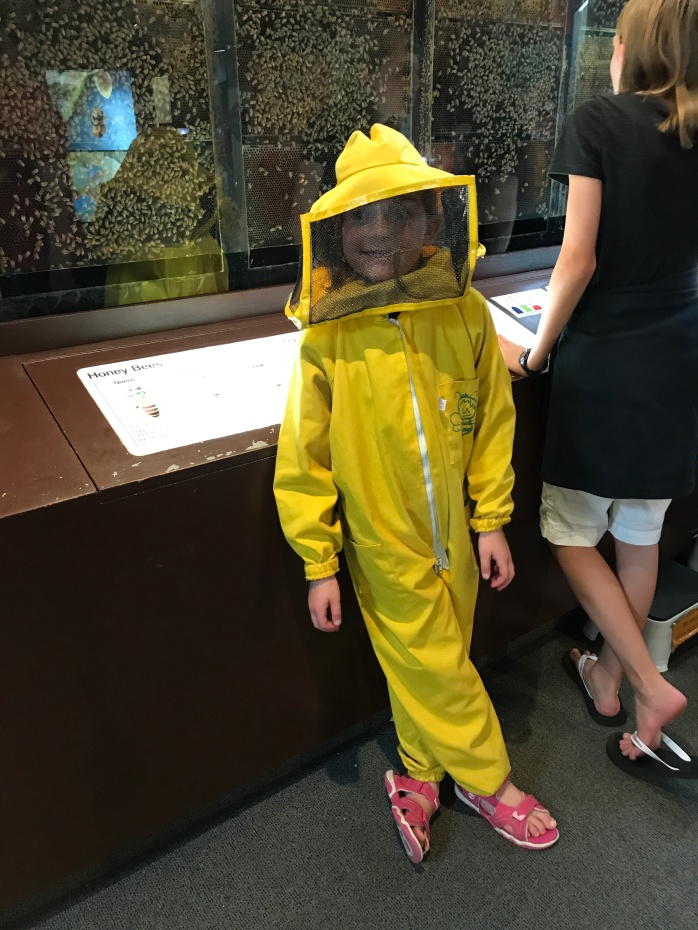 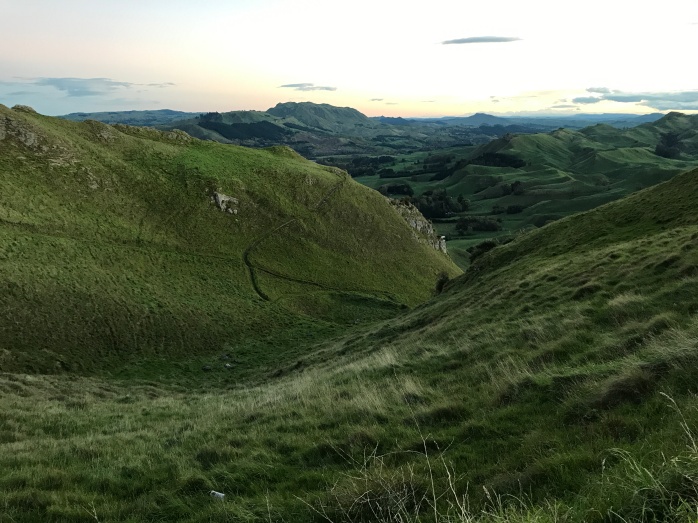 On Easter Sunday we roused the kids in the dark morning hours to hike up through the sheep pasture by our tent site following our tradition of celebrating the risen Christ with a sunrise service. This year we led the service ourselves, reading Luke’s account of the resurrection and praying together before the kids led us in a round of songs. 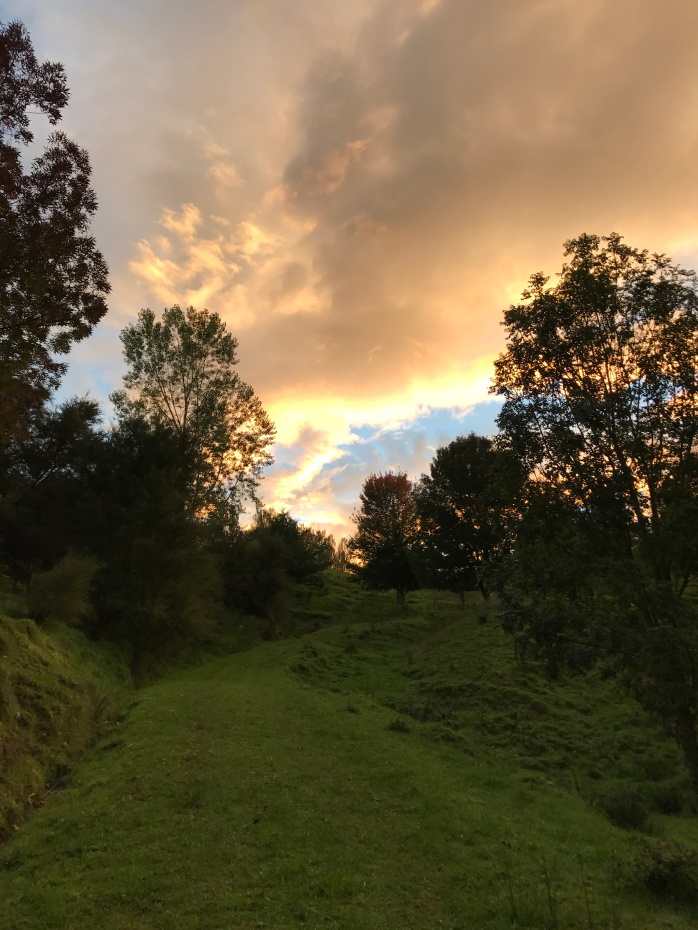 Although we didn’t follow our normal Easter Sunday routine, and we sadly missed our church family at home, we spent the day in our New Zealand fashion, driving and belting praise songs. In exchange for our common big breakfast, we ate carrots and sat in hot springs that we discovered along the route. 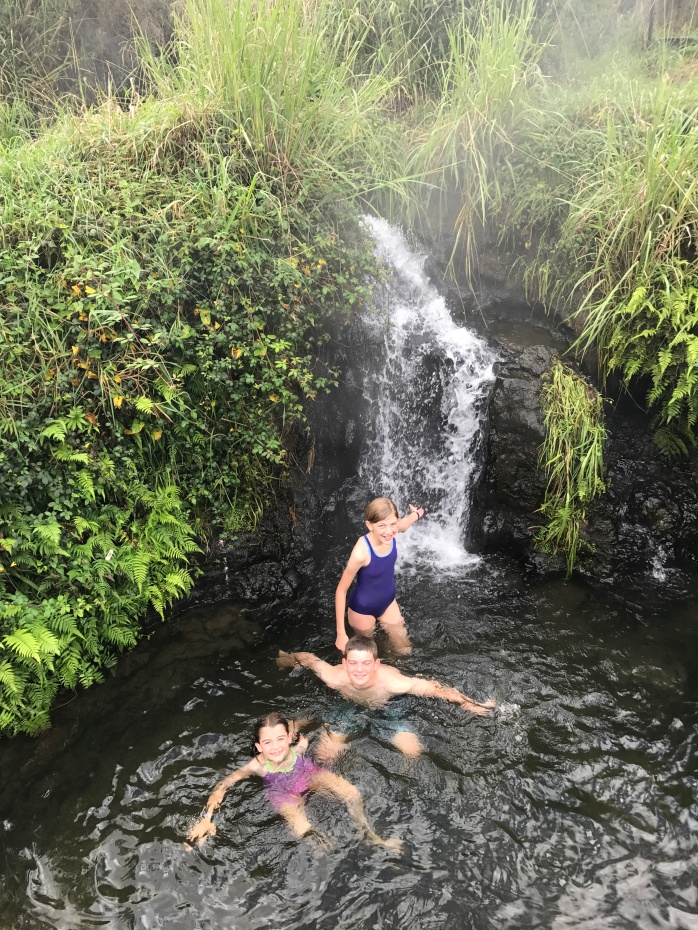 And, although we did not feast on a roast with family, we did share a table with Tandem staff friends in Hamilton, where we enjoyed sweet fellowship late into the night.

Our final days were spent north of Aukland and were tainted by continued car trouble, but we are grateful to God to have sold the van less than 24 hours before boarding the plane home. Despite drama over the van, we were blessed to camp multiple nights on the beach and awaken to miles of white sand flecked in sand dollars. 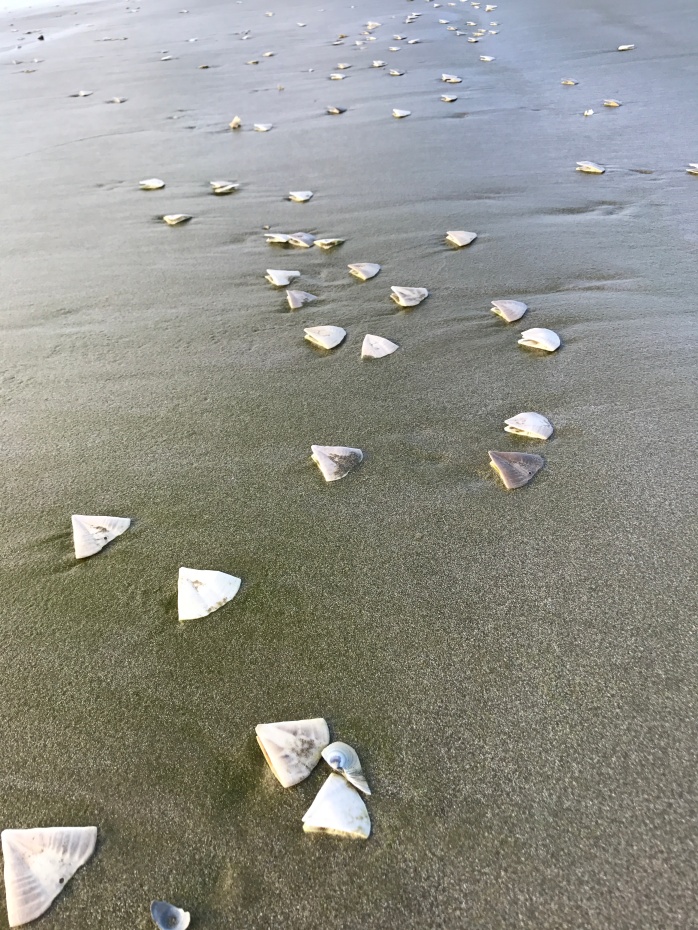 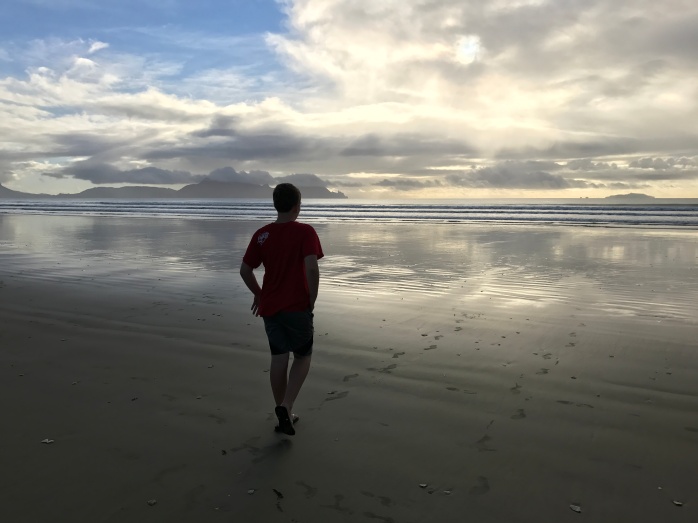 We relished the sunny days and exclaimed over the common double rainbows which colored the northland sky like a banner over waves of green pastureland.

We marveled over Rainbow Falls, Haruru Falls, and Whangerei Falls, raging with the effects of Cyclone Cook.

In the Bay of Islands, we explored the famous Waitangi treaty grounds where the Maori made their much disputed pact with the British crown. There we saw the world’s longest war canoe and were treated to a cultural performance which ended with the famed “Hakka.”

We also stopped in to see the first missionary house and church in New Zealand. How odd it seemed to stand in the footsteps of our brothers in Christ, knowing that we were somehow linked through time by a common purpose.

Those first missionaries had a longer voyage and more barriers to cross than we did in sharing the love and hope of Christ, but their long-ago efforts provided a church home for us in Dunedin, a flourishing ministry to be part of at the University of Otago, and the right hand of fellowship from young and old throughout the country. They could not have known of the lasting impact they made, but no doubt they hoped and prayed for it. We pray that our efforts would also produce lasting fruit.

With that thought, and the words of the risen Christ still ringing in our ears, “feed my sheep,” we zipped our lives into six large duffles and boarded a plane that would take us back to the waiting sheep pastures of New England.

← The End of the Beginning
Homecoming →